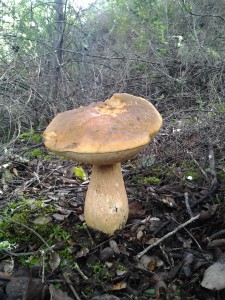 All these techniques are applied by the Woodland – Team and we can give you advice,as to what technique is the most appropriate for the situation in question.

The introduction of symbiotic fungi has the following advantages:

1. Raised vitality
The fine fungal hphae4 exponentially raise the absorbing superficie of the roots and thereby accesses water and nutrients, which the tree itself could not reach. Consequently a well mycorrhized tree is clearly more vital and less susceptible to drought and various diseases.

2. Protective effects
The best protection is provided by the so called Ectomykorrhiza5. These form a dense furry layer, called fungal mantle, as well as an inner protective ring (the “Hartigs net“) around the root, which are a very successful barrier against root pathogens. The different fungal species vary a lot the way in which they effectively protect.
Species that produce valuable edible mushrooms and at the same time are highly protective, are e. g. the cep (Boletus spc.) or the chanterelle (Cantharellus spc.). In addition to the pure mechanic defence as mentioned above, these species produce antibiotic and antifungal substances, which inhibit soil pathogens. Bild Pilze

3. Possibility of a mushroom harvest
These edible mushrooms occur on cork/ holm oak and can be inoculated by our team. After a successful development of the spawn in the course of a few years the appearance of mushrooms can be observed.

The Truffle (Tuber spc.) is a special case, because due to higher costs a mycorrhization aims more for production of mushrooms, than because of protective means. In such a case an irrigation during the summer months is recommendable.

For more detailed information do not hesitate to contact us.